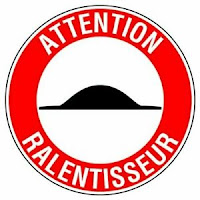 Flight no 6. My sixth attempt to fly: ten songs, a booklet with lyrics, artwork, the whole shebang. It started on a hike in the south of France in September 2015. My left leg was giving me trouble and I knew something was going to slow me down dramatically. It made me think of a speed bump or ralentisseur in the French language. I typed that word ralentisseur in my phone, not sure what I would do with it. In the time between that hike and the moment I am writing this, I was seriously distracted. By the actual speed bump, by the making of an album called A Hell of a Time, by the loss of two people that were dear to me, by meeting old friends, by many more hikes. And, in the last few months, by a pandemic. So here we are, with a virus and a new album on the shelf. Damn! It has been three and a half years since the release of my last album and now this. I guess we will have to be patient. Ralentissez!