Wednesday July 20 2016. A small abandoned house between cornfields in the middle of somewhere. Five guys with their instruments, an incredible amount of cables and a lot of blinking lights. It was hot outside. It was even hotter inside. We were all in good spirits, but there was one spirit in the house that made an annoying squeak through all the amps. Never mind, we came to record bass and drums and will do overdubs of the other instuments later.
The drummer counted to four. What we heard then, was a smooth funky rock sound I could not have imagined in my wildest dreams. We kept it going for three whole days and finished way before the deadline. Twelve songs with a groove were etched on the harddisk. I sang 'The ways things were going they could not go on'. True. Not because we we didn't want to, but because we were exhausted. Twelve is enough.
There was the music before July 2016 and there was the music after that. Those of you who expect the fifth Diftong album to be anything like the previous ones are in for a surprise. I might call the album Exile in Cornfields. You never know.

Now, if you will excuse me, I am going to get some sleep.
Gepost door diftong op 10:00 1 opmerking:

Last week, it so happened that Lynne Hanson sat in my kitchen, working on some new songs. We started talking about writing songs and I played her one of mine and asked what she thought of it. She said she liked it, but had reservations with me using the same word twice in the chorus. Normally I would think so what, but hey, this was Lynne Hanson. After struggling with that chorus for a few days, an alternative suddenly came to me. And it is a big improvement, I can tell you!

The words for the new album are finished by now. At least, that's what I tell myself: the lyrics are finished. It starts with scribbling words and phrases in a notebook. I also use napkins, the back of receipts, i-phones, desktop computers, whatever is at hand. If I think what I wrote is any good – in about  1% of the cases – I will use it in a new song. I make a lot – and I mean a lot – of draft versions. After a while – a while can be anything from 10 minutes to 2 years – I approve of my work, type it on the computer and print it. The printed version always looks very pretty and I'm satisfied. I really am for a while. Then I take a pen and start crossing out words, replace a whole verse or add one and change the chorus. I might keep on doing that until just before the song is recorded. And still there are people who think the life of a songwriter is not stressful. 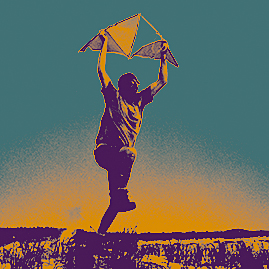 Meanwhile the graphic designer in the house, who is also my wife, is working on a book with lyrics I wrote in the last 30 years. It is strange as well as exciting to read all the old stuff. We came across a whole range of other things too, like the picture above. This is an album cover of an album that was never released. The title song was Icarus, about me flying an airplane high above the Earth's troubles. The picture shows my modest attempt at hang-gliding, jumping from a two foot sand hill with a kite in my hands. Those were the days.

And some day I’ll come tumbling down


I know I will be elated, that the book will be something to be proud of. All these messy notes contained in a book that looks beautiful. Let's just hope that I will not pick it up, take a pen and then…