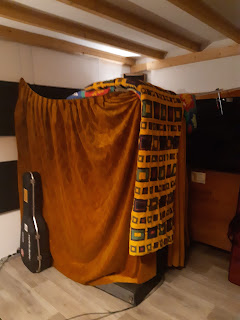 Despite all casualties, we managed to get past the speed bumps and we were flying. Flight no.6 is the sixth Diftong album and the web release is set for July 1. This album is full of identified flying objects. They appear in most of the ten songs that I wrote for the album. I have no clue why that is so. It just happened.

Partly recorded in what appeared to be Bedouin tents, it again has a real “band feel”, but it is a much more acoustic album than A Hell of a Time. We were in a big room and needed some acoustic separation. So we carried in blankets, feather beds and mattresses and built two separate tents with those.

I once co-wrote a song in the desert with a guy called Derek James Ritz. It had the following chorus:

I bought me a Keffiyeh and I grew me a beard

The boys at the office think I’m acting pretty weird

But they don’t know where I’m coming from

They don’t know where I’ve been

Going back to the desert, gonna be a Bedouin

I don’t remember how the rest went and (luckily) there are no recordings of the song. The only thing left is a blurry picture of me singing that song, totally drunk.

The CD of Flight no.6  has a great cover and a booklet with all the lyrics, but you will have to wait for that. Given the current state of the world, we don’t know when the release party will take place. Before you ask, I hate the idea of a social distancing audience. To think that you can play live music before an audience that don’t feel or smell each other… Also I don’t like live streams. I won’t mind doing those, but it is not the real thing. It’s like smelling a glass of whisky, without being allowed to take a nip.
Be patient and take care!