Who the Hell is Dow Jones 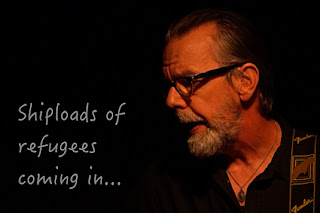 In 1992, I wrote a song that suddenly connects to the grim reality of today. To quote Brian Hansford (UNHCR Spokesperson in Washington): 'Refugees are part of humanity and we can't leave them behind'. That's it. There are refugees. They come from the worst of circumstances. As long as there is a chance of a slightly better life somewhere else, they will go somewhere else. So would you.

Spokesmen of the government complain
They have no money in their purse
Social security costs to much
And the situation is getting worse, they say
Shiploads of refugees coming in
All asking for their share
Economic growth not fast enough
The costs are more than we can bear, they say

They show us graphs on the news
Lines going up and going down
No smiling faces at the stock exchange
They got reasons to frown, they say
They show us pictures on the news
Of people skin over bone
And then they tell us it’s too hard
To get some food to the war zone, they say

And then there were three

On July 2, the fantastic e-zine Americana-UK, the UK home of Americana music, honored me by publishing an interview with Rudie Humphrey. Who could wish for a better start of the summer? A summer spent rehearsing my new and old songs with a trio! I already played some shows with Jeewee Donkers on guitar, mandolin and lap steel. Now, JD Dekker, my companion in The Understate Men, has joined us on bass. Our debut will be on October 8 at De Bunker in Gemert. There will be a mystery guest involved and a new version of my old song "Who the Hell is Dow Jones" that suddenly gained relevance in the current fuss about refugees.
After a refreshing vacation in the South of France, I am really eager to play. Especially after visiting Goudargues on this trip, the lovely French town where I played the Goud'acoustic Festival in 2008 and where I return once in a while to have a good meal, enjoy the atmosphere, visit some friends and play some songs.

I hope to see you at one of my shows.
Gepost door diftong op 03:38 Geen opmerkingen: